A Deeper Dive Into the Marvel Universe: It's All Geek To Me

We just got home from seeing The Avengers (in 2D... 3D often makes me barfy) and all I can think about now is how badly I want to read and eventually see Black Widow's and Hawkeye's origin stories.

To put it lightly, I fucking loved Avengers. It had Jossy elements all over it (witty dialogue, homage to origin stories) plus extra man-meat (142 muscly minutes!) and extra explosions. I was nervous about Mark Ruffalo replacing Ed Norton as The Hulk, but he played Dr. Banner in a very nuanced way, complete with a deep appreciation of Hulk's pure unadulterated smashiness. And I could just objectify the Chrises all day (That's  Evans and Hemsworth) - reprising their purely noble Captain America and Thor characters with plenty of abtastic ass kicking and no small amount of pontificating on the moral quandaries in which they find themselves.

Oh, and added bonus: Robin Scherbotsky is Nick Fury's right hand lady! She did not, despite us waiting through two after credits scenes, tell us who the mother is.

But back to the non-supers.  I've always enjoyed the pure vigilante superhero stories - Batman is first on any list of greatest non-super vigilante types. He has arguably the most extensive list of media credits (several tv series, countless film reboots, etc) and I don't want to presume, but I think we can all agree the Christopher Nolan Batman saga currently ongoing is some of the best superhero silver screen material ever.


But I'm aching for more of these two (new-to-the-big-screen) vigilantes. I admit, before Iron Man 2 and Thor, I didn't know Black Widow or Hawkeye at all. Jeremy Renner as Hawkeye had maybe two lines in Thor, but he stole his scenes. Scarlett Johannson's Natasha Romanoff was more instrumental in Iron Man 2, and her role as a central SHIELD operative continues in The Avengers. In The Avengers, we get several allusions to her backstory (she was forced into servitude as a spy from a very young age, and potentially "deprogrammed" in order to train her in her "specialized skill set"). We get less from Hawkeye, but he is integral to the success of the team here (no spoilers).

A quick primer on these two. 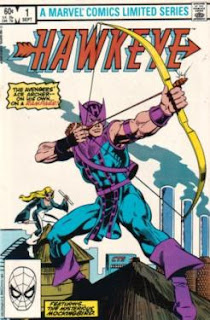 Introduced by Marvel in 1964, Clint is an orphan who runs away to join a traveling carnival. He becomes a master marksman as a carnival attraction. It's actually Iron Man who inspires Clint to become a masked hero. In his first heroic outing, however, he's mistaken for a criminal and spends his first several comics as a reluctant villain. Additionally, he falls for Black Widow, then a spy for the Russians, and blindly follows her - thereby raising his villain cred. Yada yada, she abandons him, he realizes his folly, and decides to follow the straight and narrow from them on. So, potential for a super villain love story between two really attractive people?? I'm in. Please make this movie. 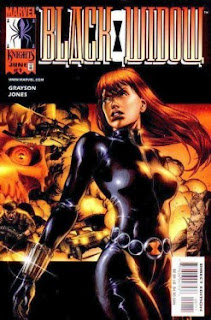 Black Widow's origin is a little muddier, and actually there have been at least three different Marvel characters carrying the Black Widow moniker. Natasha was the first, introduced by Marvel in 1964. As noted above, she starts out as a Russian spy villain, taking on Hawkeye as her smitten sidekick. The Russian government actually supplies her first costumes and weaponry, but she defects to the US in 1966, becoming the 16th member of The Avengers.

I don't care much about truth in film to comic books, really. Most of these stories have several versions, several characters have multiple origin stories, and a single superhero moniker is often owned by several different characters. It gives the film creators a lot of license to choose story elements from different parts of the Marvel Universe and piece them together to make a compelling movie. I'm only pointing out the difference in The Avengers because it makes me super excited to know that as this particular film franchise grows, we might get a whole lot more super and non-super heroes in the mix.

All this to say, More Hawkeye and Black Widow, please! I might even order have already ordered the comic books featuring them that are actually available. This also gives me an excellent reason to stalk the comic book section at Comic-Con other than to get some breathing room. (Sad but true: On the exhibition floor at Comic-Con, the only place you can put your arms out and turn in a circle is by the comic books).

Am I going to start reading comic books at the ripe old age of 28? Ummmm yes. And since it took me until about 22 to start reading graphic novels, watching anime, and playing video games, we'll just count this as a continuation of my geek education. My nerducation. My pursuits in geekademia. My studies in geekology. I could do this all day.

Enjoy The Avengers!! (And stay all the way to the very very end, even if you think you've seen the after credits.)
Posted by A Most Ingenious Paradox at 7:04 PM

Kick ass commentary. I loved this movie so very much. I think it might be the best movie ever.

Excellent post. I loved that movie more than I can say. I think it might be the best movie ever!

Thank you!! It's definitely going on my list of favorites. For a slightly more nuanced view, check out the nytimes review ( http://www.nytimes.com/2012/05/04/movies/robert-downey-jr-in-the-avengers-directed-by-joss-whedon.html ) - People kind of raged about it but as far as I can see, the reviewer just thought the explosions and attacks on NYC were too big and grandiose and that the movie is best when the characters are interacting. The thing is, at that level, I don't think anyone would disagree - but would the Avengers have had the kick in the pants they needed to defeat Loki's army without such a threat to the city/world? I know there's a catalyst that pushes them to act (no spoilers!) but that catalyst alone (independent of the threat to the world) could have prompted one hero to fight a bad guy - the fact that it's the threat of an actual apocalyptic event means all the Avengers have to assemble (hardy har!) in order to defeat it.