Caroline in the Senate 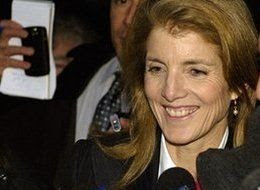 As much as any good Democrat loves all the Kennedys, those living or dead, I do love the Kennedys. I even have a picture of my friend Sarah and I kissing a poster of John F. and Bobby Kennedy in my dorm room freshman year at Loyola. I think perhaps I will dig that picture up and post it... anyways, the point is, we love the Kennedys. HOWEVER... I do not love Caroline. I think she's a good progressive and I'm sure she'd make happy Demmy vote time in the Senate.. but the more exposure she gets lately, the more she just annoys me as a person. Check out this excerpt from her interview with the NY Times last week: 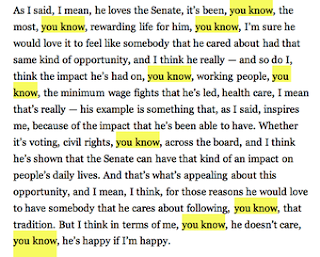 Twelve times in under a minute, 138 times in the entire interview. It's not just her verbal pause that gives me pause, though. I mean really, we all have them, and some (doncha know) are far more annoying (uhh.. uhh... uhh). No, what gets me is that in the course of the interview, Kennedy really seems to point out, without ever saying it directly, that her celebrity is her best qualification for being appointed Senator, and that the reason she should be appointed is that she wants to be a Senator. What? She also gripes at the Times reporters, asking them if they write for "a women's magazine," insinuating that they are asking gossipy questions rather than something a little more concrete. Too bad she doesn't really answer the more concrete stuff, and what the heck is that supposed to mean, "women's magazine"? Plenty of "women's magazines" make important contributions to journalism in topics of women's health, domestic violence, and other areas. There are enough mysoginistic men out there without self-hating women adding to their numbers.

I suppose I should point out that the appointment of Kennedy to the Senate by Governor Paterson (and she is his top choice, according to officials who spoke with the AP today) does not affect me, and likely never will, as I am not now and do not plan on becoming a resident of New York state anytime soon. I guess I would just love to see Hillary Clinton's Senate seat filled by someone of her caliber. I love seeing female representation in politics - I hate seeing poor examples of female representation. It makes me think, "is this the best we can do?" There are 16 women currently serving in the U.S. Senate. Not a math whiz? That's 16% of the Senate. Guess what percentage women make up of the United States... about 51%. And while we're at it, African Americans make up 13.4% of the United States, and we have exactly... zero serving in the U.S. Senate (unless you count "Senator" Roland Burris of Illinois... but that's another joke for another post). So much for a Congress that represents the people it serves. Back on women (that's what he said...), I know many, many talented, intelligent, driven women who would make outstanding elected officials. I am not sure that we can blame the electorate for the dearth of female reprentation. I think much of the blame falls on we women who decide, for many different reasons, that the work of a Representative or Senator is better left to the dudes who've been doing it for a couple of centuries now. (Interesting tidbit: Of 1,897 total U.S. Senators who have served since 1789, exactly 35 women, or 1.85 percent of the total, have served.) I've taken three different Bachelor's and Master's level courses on the reasons why this is true and have already unintentionally made this post a rant, so I will only point out a couple of the major ones and then pass it on to you. First I'll mention that more women now graduate from college than men, and more women graduate from law school than men. We're not talking about a lack of education for American females. However, women are far more likely than men to feel pressure to (or just want to?) give up their careers in order to raise children. Secondly, women are less willing to put their private lives on display in the way that campaigning for public office demands. So, dear readers, what say you? Where are the women, and why do we get such astounding represtentation as Sarah Palin and Caroline Kennedy when someone does step up to the plate?

Note: I am fully aware that there are some phenomenal women serving in elected and appointed positions. Hillary Clinton, Jan Schakowsky (my rockin Rep from Chicago), Shelley Berkeley and Dina Titus (my rockin Reps here in Vegas), Jennifer Granholm (my Michigan governor... okay she has her issues, but would YOU want to govern Michigan??) even Condoleeza Rice (though I disagree with her policies, I would not doubt her intelligence, competence, or drive). I think my issue is that until we get a representative sample in both houses, i.e. 51%, we need to put up the best of the best. When we have 51% we can let some doofuses (doofi?) in. Comments please, especially from the ladies! But mans, you're allowed, too.
Posted by A Most Ingenious Paradox at 5:57 PM

I totally agree! I can't stand Caroline Kennedy! I've always thought she doesn't seem all that bright and she's generally a combination of vacant, snippy, or downright rude in any interviews I've seen with her. I can't help but think her appointment would be much like choosing Sarah Palin for VP...a gimmick. If I were Hillary Clinton, I'd be insulted by that decision. It appears the only qualifications Governor Paterson is concerned with are her gender and her level of celebrity. So he found another woman with a decent level of celebrity and beyond that nowhere near the qualifications that Hillary has. I love women in power but I don't like this trend of puting women in power JUST because they are women...even ones that actually set idealogies about women back about 40 years (see Paliin). There are sooooo many supremely capable, likable, and smart women out there that would be MUCH better than picks like Caroline Kennedy. Honestly, I'd rather Chelsea Clinton take the spot! :-)

PS Can you imagine how amazing congress would be with truly representative demographics!
13% Latino
13% Black
10-20% gay
51% female
15% athiest
Honest to god, if our senate looked like that CSPAN could switch to pay-per-view!!! I hope we get to see it pretty close to those numbers in our lifetime!!