This post is in response to the following comment, which was posted by Kelly on my post about Sarah Palin comparing her own media coverage to that of Caroline Kennedy last week. I typed it all up as a comment response and then decided to make it its own blog post since it forced me to examine an issue I have been avoiding deliberately: The auto industry bail out. 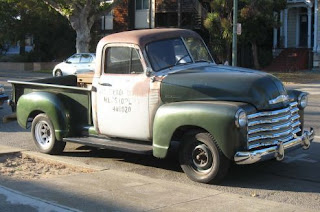 "I am curious as to what you think about the second recovery package. I, for instance, do not always think that a bailout is the way to go. Chapter 11 exists for companies like General Motors to help them get out of cumbersome contracts in order to help them become profitable again."

In regards to the auto bailout, I have avoided that topic on purpose... I grew up in Michigan and don't know anyone there who isn't directly hit by the failure of the American auto industry. That said, I have driven a series of craptastic Fords and Dodges, and this summer I finally bit the bullet and bought myself a lovely little fuel efficient Korean car that I love dearly and know will last me the next 10-15 years at least, because I couldn't deal with my shitty unreliable American cars anymore. I feel pretty strongly that if the American companies had produced RELIABLE, FUEL EFFICIENT, COMPETITIVE cars, instead of giant, impractical beasts that guzzle fuel, mow down smaller cars with reckless abandon, and break down regardless of their massive stature, they would not be in this predicament. Again, you reap what you sow... But that's the executives, not the workers and their families. Now, THAT being said, Chapter 11 is not an option for the auto industry. Would YOU buy a car from a company that had just filed for bankruptcy? That you weren't sure you'd be able to get serviced or find parts for? I sure wouldn't. Circuit City filed chapter 11 in November, and then this past Friday announced liquidation of assets (get your TVs now folks!), because once consumers lose confidence in a company, there's not much that can be done to save it. Big-box electronics stores are one thing... the entire American auto industry, with its hundreds of thousands of jobs and the communities it has supported, is another thing entirely. So to sum up my feelings here, they're conflicted and I'm rather ambivalent (semantically speaking, can one be RATHER ambivalent?? I'm not sure...) in that I personally am pissed at the auto execs for their poor business practices and for leaving me stranded on the side of the highway more than once. (More than twice. More than 3 times. I'm not kidding). HOWEVER - ultimately this battle is not about the execs. It's about my neighbors back home who are struggling because of their bosses' bad judgment. I think if we can afford to bail out banks (without oversight or regulation, I might add), banks who then have NOT translated that bailout money into competitive loans for qualified individuals, we can certainly afford to "bail out" an important industry on whom we are placing ENORMOUS restrictions and regulations - produce fuel efficient cars in XX numbers by XX date, for example.

I want to thank Kelly for asking me this question - my personal and political feelings about this issue have been in conflict for some time now, and that's why I haven't blogged about it. Thinking out my response to her comment and blogging it all out, however, has gotten my thoughts on it in order. I think over the course of this response I have become less ambivalent. Arguments/comments/bitches/gripes/complaints welcome and warranted! :-)
Posted by A Most Ingenious Paradox at 10:12 AM

I believe the Auto Industry should not have been bailed out. Other large companies have filed for Chapter 11 and have survived. In 2002, United and several other airlines were talking about filing for Chapter 11. Some merged, some closed, and United went through the bankruptcy process and is still around. In all, the airline industry is still around and people are still flying. Currently the newspaper industry is falling apart, and I haven't heard any words about offering them a bailout. I believe the big underlying reason why the Auto Industry got bailout money is because the democrats would look really bad in front of the unions if all the union workers lost their jobs. The democrats in office would have hard explaining to the unions, who voted them into office, on why they couldn't get any bailout money while they control the House and Senate. But once Bush offered the banking industry money, he had to give some money to the Auto Industry. Unfortunately, we are now setting the precedent for the government to bail out any industry if they fall on hard times no matter what the reason. Though, I hate hearing how families are losing their jobs because of corrupt corporate execs, I don’t believe bailing them out is going to help. It is only delaying the inevitable. If we keep acting like this, the US will become a socialist state.