He used to make me sick to my stomach. As I mentioned before, after he was reelected in 2004 I had trouble getting out of bed I was so upset. But now, in December of 2008, Mr. Bush is no longer dangerous. He's got 49 days in office (as my trusty countdown clock tells me) which is long enough for him to make plenty of annoying lame duck laws and executive orders that will be a pain in the ass of the new administration, but he's not truly dangerous anymore. And the best part? He seems pretty eager to get outta dodge. He's even got a sense of humor about it. Today he compared his reception in Africa with the reception he receives at home, saying "It was good to see them all waving with all five fingers." He even told Charlie Gibson that he believes people voted for Barack Obama because they're sick of George Bush - not in so many words, but here it is: "And I'm sure some people voted for Barack Obama because of me. I think most people voted for Barack Obama because they decided they wanted him to be in their living room for the next four years explaining policy" 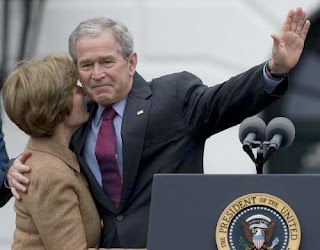 A couple months ago, while speaking to the press, Mr. Bush said something along the lines of, "Thank goodness I won't be around next year, but you suckers will be." (That is NOT the exact quote, but I can't find it anywhere. That's the gist of it though!) The point is that this guy is ready to go. He has been extraordinarily cooperative with Obama's transition team, to his credit. There are no reports of shenanigans (like when President Clinton's staffers removed the W's from all the White House keyboards... heh...) in the handover. Our current president seems determined to provide a dignified, professional, and thoroughly thought out transition to our next president. Kudos for that, Mr. Bush. However, since there's only so much longer we can revel in your terrible inadequacy, here are the 5 Best Bushisms of 2008!

3) "And so, General, I want to thank you for your service. And I appreciate the fact that you really snatched defeat out of the jaws of those who are trying to defeat us in Iraq." --to Army Gen. Ray Odierno, Washington, D.C., March 3, 2008

2) "Goodbye from the world's biggest polluter." --in parting words to British Prime Minister Gordon Brown and French President Nicolas Sarkozy at his final G-8 Summit, punching the air and grinning widely as the two leaders looked on in shock, Rusutsu, Japan, July 10, 2008

1) "I'll be long gone before some smart person ever figures out what happened inside this Oval Office." --Washington, D.C., May 12, 2008
Posted by A Most Ingenious Paradox at 7:25 PM

If George W. Bush has shown us anything it is that anyone, ANYONE, can become president. Its good to be able to finally laugh at him now instead of being terrified.

"...I cannot help but think that if he hadn't been fucking things up for the past seven years...would we love him?!" --Jon Stewart