In Croatian, "Blago" means "blessed." Gov Blagojevich of Illinois is Serbian, I believe, but I'm willing to bet it has a similar meaning there. Regardless of what his name really means, something tells me this guy isn't feeling too blessed today. Well, maybe a blessed idiot.

I'll start by saying that Chicago is my second home, I went to school at Loyola, and when I worked for Senator Richard Durbin in the summer of 2005, I indirectly did work for many Illinois Democrats, including Barack Obama, but not so much for G-Rod (old nickname for the governor). I was registered to vote in the state of Illinois. I never had the opportunity to vote for Blagojevich based on his re-election schedule (he was first elected to office during my first year in Chicago and I lived there 4 years), though I'm sure I would have at the time, based on political allegiances... tho I always found G-Rod a little shady. And look here what I dug up... Summer 2005: 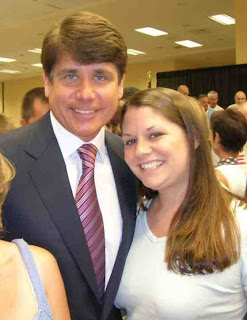 Yep, there I am, 3 years younger, 20 (30?) pounds heavier, smiling like a goofball with my corrupt asshole of a governor. Why am I showing you this? Well, it's already out there and I figure I better get it out there again now and explain it before I'm running for office in 15 years and someone digs it up and says this was 3 years later than it really was or that I was somehow in the mix with this yahoo.

Okay in case you didn't see the news today, I should explain. G-Rod was taken into Federal custody this morning and is accused of conspiring to sell or trade Barack Obama's Senate seat to the highest bidder! How low can you get?? I'm sickened. Let's leave the corruption to the Republicans, shall we?

And something else... not only "how low and slimy can you get?" but "how dumb can you be???" This is a guy who yesterday said he's got "nothin but sunshine over [him]," and invited wiretapping on his phones! Well the ubiguitous "they" called his bluff, listened to his calls, and lo and behold he found himself in custody this morning. Derrr...

Nobody with those beady little eyes and that much hair should be trusted, I think. 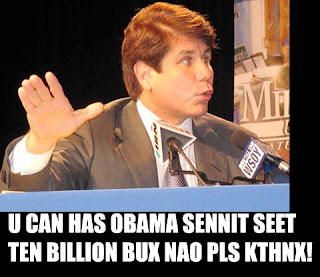 (above lawlpicture compliments of the OMG TOO SOON blog specifically Noctolator - stealing w/out crediting is for loozers)
Posted by A Most Ingenious Paradox at 4:14 PM

Just wondering if it is politically expedient for someone considering a future run for public office to call the governor a corrupt asshole and a yahoo. Even though it may be true, you might someday have to rely on his friends, especially if you are considering office in crooked Chi-town. Love, Dan

Hello brother :-) you make excellent points. I was so astounded that day that I perhaps made some nasty sounding comments that i didn't mean.... meh, who am i kidding? I meant it!