The buzz around town is that the next cabinet post to be filled will be that of the Treasury Secretary. Names floated about include Larry Summers, Tim Geithner, and Warren Buffett, who at 77 years old ranks #1 on the Forbes World's Billionaires List. It looks like it will be Summers, according to

Fortune believes that former Treasury Secretary Lawrence (Larry) Summers is in the lead to get the job. Summers, who served in the Clinton Administration, wouldn't be a surprise pick. He along with other economic experts, ex-Treasury Secretary Robert Rubin and former chairman of the Federal Reserve Paul Volcker, have advised Obama during the campaign, especially as the economic crisis unfolded. Volcker is said to be highly interested in the Treasury job, but Summers, with support from Rubin, has the inside track.

But if history has taught us anything, it's that the most obvious choice is not necessarily the one who will win out. I'd like to see America's most beloved investor, and richest man, in the post. He made his own billions and is one of the most respected investors in America's history. Imagine Buffett as Treasury Secretary, Powell as SECDEF (though I don't think that will happen, unfortunately), and our friend Bill Richardson as Secretary of State... what a well-rounded, highly respected, bi-partisan cabinet we would have to look to for all matters of national importance. It gives me goosebumps (the good kind!) just thinking about it 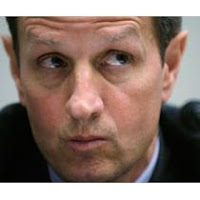 Geithner, Buffett
Posted by A Most Ingenious Paradox at 2:18 PM

I think it'll be someone with a banking background, so not Summers/Buffett. So my gut is saying Geithner or possibly Volcker, but we'll see in a few weeks...