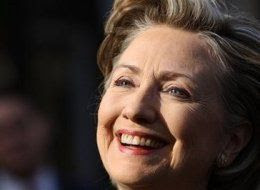 Huffington Post has broken the story that Senator Hillary Clinton has been offered a position as Secretary of State, and that she is requesting time to consider. The roll-out of this news was bizarre - last night Andrea Mitchell broke to MSNBC that Clinton was under consideration. Then John Kerry told some friends that Clinton was now "in the mix," despite the fact that Kerry had been considered a frontrunner. Then today, HuffPost broke the big news. All that can be thought of all this leaking is that Clinton is gauging public reaction to the news before she accepts or declines. She's wily that way. Despite my deep love for Bill Richardson, and the fact that Kerry was most likely promised the post early in Obama's campaign (Kerry was one of the very first Senators to endorse Obama - probably in exchange for something...), I feel like a cabinet level position is a good fit for Clinton. She can work with Obama but she can also fight with him, and she will. I think that's awesome.
Posted by A Most Ingenious Paradox at 5:29 PM

I agree. I reeeeeally really like Bill Richardson but Hillary would be my second choice. I really don't like John Kerry for the job. This is supposed to be the US's strongest link to the nations of the world and, I'm sorry, but John Kerry has the personality of a dead fish (and is much worse at telling jokes). My guess is that Hillary will take this one and I think Kerry will end up somewhere in the Obama admin. Alas, I can see poor Billy getting left by the wayside again :-(

Not to mention that Hillary took sniper fire when she visited Bosnia in '96. That's major street cred.

I don't get the "left by the wayside again" comment... Richardson held a cabinet position under Clinton and was the US Ambassador to the UN for a little bit. The dude's had plenty of time in the spotlight and frankly in none of those posts did he particularly distinguish himself. For a blast from the past reference: http://www.slate.com/id/84864/