-Oprah's Mr. Man has been revealed - he is Sam Perry, Obama's communications director for the Silicon Valley region. He appeared on Oprah's show today, and apparently he has achieved a modicum of celebrity for acting as Oprah's hankie Tuesday night. Better Sam Perry than JT Plumber, don't ya think? 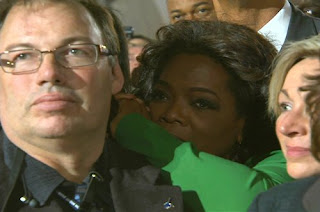 -People Online ran a five-things-you-don't-know-about-Rahm article that I'll run here as a follow-up to my earlier post on Rahmbo. What a goofy guy...

• He's the real-life Ari's brother. His youngest brother Ariel (Ari) Emanuel is a founder of the Endeavor talent agency in Hollywood and was an inspiration for Jeremy Piven's character, Ari Gold, on HBO’s Entourage. Not to be outdone, Rahm is said have been a model for Bradley Whitford's character, Josh Lyman, on The West Wing.

• He could have been a ballet dancer. He studied ballet as a teen and was offered a scholarship to join the renowned Joffrey Ballet, but went to Sarah Lawrence College instead.

• He's missing part of a finger. In his youth, Emanuel badly cut a finger on a meat slicer while working at an Arby's. The wound became infected, and he lost half of the middle finger on his right hand.

• He volunteered with the Israeli army. During the first Gulf War, he did a stint as a civilian volunteer with the Israel Defense Forces, rust-proofing brakes on a base in northern Israel.

• He once sent a rotten dead fish to a political enemy. In the Clinton administration, his take-no-prisoners style earned him the nickname "Rahm-bo."
Posted by A Most Ingenious Paradox at 9:19 PM